Just added to your cart

Spark R&D bindings are now IN STOCK. Nitro and Jones from our friends - just ask. To place an order, please contact us on WhatsApp. Adding product to your cart

Tackles everything from powder to ice

The Freeride Split was developed to tackle any kind of snow and terrain you might find in the backcountry.

The combination of high-speed stability, maneuverability and catch-free properties has made the Freeride Split one of the most talked about splitboards of the past few years. Its long sidecut radius makes the splitboard calm and forgiving, while the rocker and reverse sidecut in nose and tail makes it float remarkably well in powder and remain catch free.

A tongue and groove on the 2019/20 Freeride Split eliminates movement between the board halves. The new splitboard assembles like a regular splitboard and rides like a snowboard.

Gone is the lack of response that splitboards used to suffer from.

The tongue and groove of the 2019/20 Freeride Split eliminates movement between the board halves. Assembles like a regular splitboard. Rides like a snowboard.

A custom ice scraper comes along with the splitboard. It mounts onto your poles and can be used to easily clean both board halves from snow and ice.

It is standard to use a longer turning radius on a freeride ski than on a slalom ski in the skiing industry; however, Furberg Snowboards is the only brand to adapt the turning radius for freeride snowboards. A longer turning radius generates better stability at higher speeds and, more importantly, gives the boards a calmer and more forgiving behavior by distributing the edge pressure over the entire contact length.

The best compromise between the flotation of full rocker, responsiveness, and grip of camber.

When a board is ridden flat on the snow, a long rocker transition will make the nose of the board impact irregularities with a low angle of incidence and slide over with little resistance. Many snowboard brands are aware of this, but only we have combined the rocker with a reverse sidecut in nose and tail to maintain this low angle of incidence when riding the board on edge.

The long transitions of the reverse sidecut make the board turn more effortlessly since the typical pressure points at the end of the effective edge do not exist. The overall result is a very catch-free and surfy board.

Increases flotation and makes the board slide over irregularities in the snowpack with less resistance. The very last part of the nose also has a slightly steeper angle to make touring with our splitboards easier. 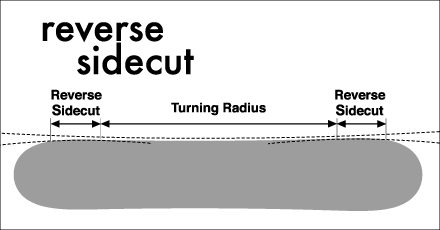 * Board weight can vary by +/-3 %.
Use left/right arrows to navigate the slideshow or swipe left/right if using a mobile device